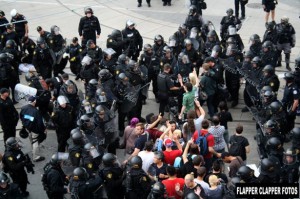 June 26, 2010
My friend and I were with a very peaceful crowd of people starting at King and Bay and marched over to Queen and Spadina. We were stopped at Queen and University but ultimately let through. At Queen and Spadina, it was a sit-in. We saw the riot police circling us and people started to leave. Somehow at the end there were only 30 of us surrounded on all 4 sides by the riot police. We asked if we could leave and how. They did not talk to us. They kept closing in on us and twice we were shoved against each other and we were near trampled.

Someone said we could leave through the middle, so he and I went up and we were separated. I was escorted by a police officer, who told me to put my hands behind my back and that I was under arrest for unlawful assembly and read me my rights. I was taken to an alley way to be processed. I asked if I could be with my friend but they didn’t take me to him. Then in the alley way, a female cop without asking my permission took off my hijab [head scarf] and sweater leaving me in my tank top and jeans. This occurred in front of all the detainees in the alley way. The officer dealing with me ultimately helped me put my sweater back on later on.

My friend and I told them we were physicians which prompted them to run a criminal record check over the phone and we were then let go.

This entry was posted in Uncategorized. Bookmark the permalink.